Posted by Journey with Jair at 10:59 PM No comments:

Email ThisBlogThis!Share to TwitterShare to FacebookShare to Pinterest
Labels: you gotta be "Doing the right thing has never gone so wrong…"

The adorable Tobey Maguire stars alongside funny beauty Elizabeth Banks, excellently quirky Laura Linney, the "scandalous" star Kerry Washington, a serious Ray Liotta and the lulling Dennis Haysbert, whom you may remember from 'Far From Heaven' but more likely, from all the 'State Farm' insurance advertisements, with the slogan, "Are you in good hands?" Written and directed by Jacob Aaron Estes, this 2011 drama-comedy was much more of a thriller for me. I've never found people's pain comedic, but this film despite the series of unfortunate events was a fantastic, incredibly unbelievable ride of chaos! Who would think that a few raccoons could lead someone to the darkest moments of their lives.

Wonderfully written and executed, this film was quirky and outrageous and viewers find themselves appalled, worried but thirsty for more. It unfolded very much like a fairy-tale on acid; hopeful and bright beginnings, the plot, the climax and then a cool-down very much mirroring a backyard of beauty yet filled with worms living underneath it all.

Rated R for language, sexual content and adult situations, this film isn't for the little ones, but full of itty-bitty and not so itty questions one might ask themselves if they were caught in such situations on their choice of actions. Maguire who replaced James McAvoy who originally was to play the part of 'Jeff Lang', shone exceptionally in this film with his magnificent and priceless expressions throughout the steady rolling turn of events.

Very dark comedy, but if you want guaranteed fun - do see it - it's an absolute delight!

Posted by Journey with Jair at 11:24 PM No comments:

Good for the Soul

It's nice to take a trip down memory lane, especially when Tarantino is involved. In 1994, both Quentin  and Robert Avary brought us short fictional stories of crime, drama and thrilling moments by a most appealing cast, John Travolta, Samuel L Jackson, Uma Thurman, Christopher Walken, Bruce Willis, Rosanna Arquette, Phil LaMarr, Ving Rhames and many many others. Laced with the usual violence, heavy drug-use, obscene language and graphic sexual situations; this wildly provocative film won an Oscar that year and another 59 wins and 46 nominations.

With a run-time of 154 minutes, you would think that the audience would lose interest and fast, but this never happens in Tarantino films, because even though the destructiveness may get to you, the dialogue always saves because it is filled of wit, intensity and wisdom. The shots are always unusual, and viewers are vehemently reminded of the passion that went into making these movies.

Tarantino keeps the heart pumping and you on the edge of your seats, he knows what people want and if you're into action, you'll never be dissatisfied. In Los Angeles, there are people who make movies, and then there are people who tell stories so expertly that hit-men, boxers, bandits and gangsters all have lives that intertwine believably.
Posted by Journey with Jair at 9:39 PM No comments: 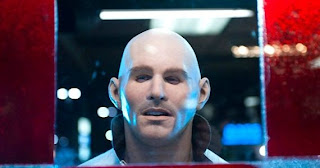 The cast of American heart-throb,Ryan Gosling and English beauty Carrie Mulligan is enough to make anyone these days intrigued to see a movie; but I was made aware of this film because of it's beautiful soundtrack. Based on the novel by American James Sallis, adapted into screenplay by Persian Hossein Amini whom you may remember to be the writer of 'Snow White and the Huntsman' and directed by Danish Nicolas Winding Refn, together produced cinematic gold with this 2011 crime-drama.

Unique, mysterious and stoic, this film's message is one of being careful who you do good-deeds for and how much is too much with getting involved. Our main character 'Driver' played by Gosling kept viewers interests peaked because of his darling and gentle personality flipped into one you wouldn't want to mess with. Christina Hendricks, Ron Perlman, Albert Brooks and Bryan Cranston also add colour to this film's strange, dramatic and violent palette. There were so many wonderful and delicate details carefully constructed within like Gosling's 'Scorpion' jacket, and the locations in LA where this film was shot like the small pizzeria and mechanic boss' garage.

Mystery was probably my most beloved element of this film, as there was very little dialogue, but it also is Rated R for its strong brutal and bloody violence, obscene language and some nudity. With an estimated budget of $15 million USD, filmmakers were able to gross not only $35 million USD back, but also an Oscar nomination and another 43 wins and 80 other nominations. This film was intense and not recommended for the faint-hearted; but certainly beautifully shot and thought-provoking story.

Posted by Journey with Jair at 6:44 PM No comments: 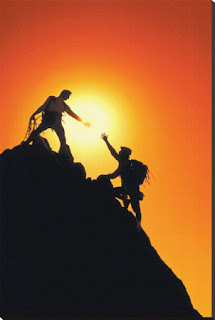 The transformational shift happening now in our Universe is becoming clearly apparent; and for many whom were asleep are finally awakening from their slumber. We are beginning to identify and see things in a whole new light and incredible way. This shift may seem terrifying, fearful and sensationally awful for some, but for those who already are on the path, know that this change is for the better and because of our lightening progression we will catch up to where we need to be at this point in time. It is a very exciting time!

Like attracts like, and whatever we focus on be it positive or negative manifests into our lives. The Law of Attraction is wide open and our thoughts are flying lights of energy that make our wishes reality like the story of the genie and the bottle in 'Aladdin'. Because we are transforming into deeper individuals, we find that persons or things that are not 'for us' leave from our lives. See this as a positive thing; the Universe is getting rid of the old and attracting those that 'mean business'. Sometimes other people have to leave so that new ones can arrive. Of course we all love to be loved, it gives us strength and confidence, but really we are already strong beings of light and love, it is in giving love to someone that shows a deeper courage. Love is one thing, but forgiving those that have crossed us negatively is the real characteristic of strength.

Therefore, do not fear my darlings, go forward with strength up that mountain. The mountain of your desires that rest in your quivering heart. It is there for a reason. You are here for a purpose. And that dream is lucid because it is possible. Now is the time! 'Ask for it'! Shout it out! For those who ask shall receive. You may not get it straight away, but once you keep on that path, no matter how steep the mountain, you will reach where you need to be. Your rewards, wishes and desires of your heart arrive to those who stay strong. Keep the faith. It arrives always, at the right time.

Posted by Journey with Jair at 11:11 PM No comments:

Email ThisBlogThis!Share to TwitterShare to FacebookShare to Pinterest
Labels: ask for it, strength, transformation 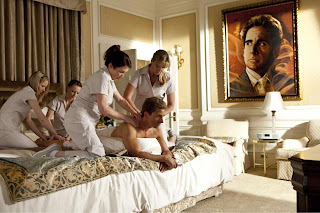 Steve Carell always delivers as he always does, but Jim Carey and the story in general didn't really bring in side-ripping laughs but instead a few chuckles.  2013's 'The Incredible Burt Wonderstone', however entertaining, it's repeat jokes after a while became forced and predictable just as were these super-star magician acts. Steve Buscemi whom you may remember from 'The Big Lebowski' or 'Big Fish' as well as Irish/American actress Olivia Wilde whose been hot on the Hollywood circuit and working in a number of films like, 'Tron', and 'In Time' to name a few also co-star in this comedy.

Filmed in Los Angeles with a budget of a whopping $30 million USD, this film fell shy of 8 million USD at the box-office. Writers Jonathon M. Goldstein and John Francis Daley shared a decent message about finding the strength from within and standing up to bullying. Despite success, one must always remember where they came from and to remember those who matter most. The stunts and action was most times over-the-top but funny-man Carell depicts the sensational truth of what shows and a life-style in Las Vegas, Nevada is all about.

Light on inspiration and laughs but compelling enough to make it to the end.

Posted by Journey with Jair at 1:47 AM No comments:

Oz, the Great and Powerful 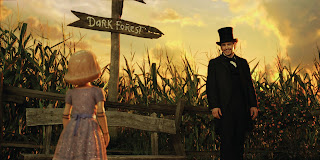 There was a time I was fascinated by and in awe of the talent of James Franco, and his talent still exists but over the years his delivery has lost it's genuine charm. Franco, along with sweet Montana blonde Michelle Williams, Ukranian bright-eyed bombshell Mila Kunis and force-to-be-reckoned-with English Rachel Weiz and Zach Braff all team together with Disney to bring this family adventure to life.

Written by Mitchell Kapner and David Lindsay-Abaire our viewers are whisked into the visually- appealing fantasy world of Oz, where wizards, witches and fairy creatures are to be excepted but more importantly the film's message of 'Oz' played by Franco learning to become a better man when he realizes how to use more than magic to face the problems he has at hand.

Not as jaw-dropping or attention-grabbing as other fantasy films I've seen, but certainly inspirational and fun for the children audiences. I was impressed with new-comer angel-faced Joey King who played the 'Girl in Wheelchair' as well as the 'China doll girl' whom also stretches her acting chops in 'The Conjuring' out this month (July). Reminiscent of a young Angelina-Jolie; Joey King has got a solid acting career ahead of her if she plays her cards right.

Posted by Journey with Jair at 1:24 AM No comments: 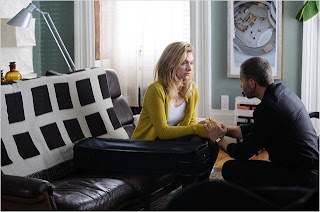 Beautiful classical music is to be expected in this 2012 film, but explosive emotions and secrets ablaze is what takes the audience off guard. Written by Seth Grossman and Yaron Zilberman this story is far from predictable and shows how after years of dedication and loyalty one slight change of a paddle overturns the boat.

Directed delightfully as complicated and intricate as a Beethoven's piece by Yaron Zilberman and showcasing classic and talented actors like timeless Catherine Keener, attention-grabbing Christopher Walken, smooth Philip Seymour Hoffman, Ukranian Mark Ivanir, and younger talent English Imogen Poots and Liraz Charhi. Bringing a wealth of depth besides its music; viewers journey with the character's troublesome desires, fears, lusts and resentments all in a neat 105 minutes.

With a meager budget of $75 thousand USD, in a few short months were able to accumulate over $1 million USD back. Beautifully shot and thought-provoking in so many ways this is a story that is worth seeing, even if sitting in the middle seat on an airplane.
Posted by Journey with Jair at 1:01 AM No comments: 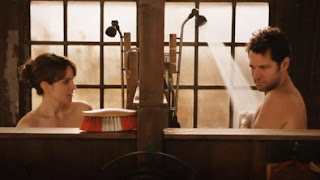 We all love Tina Fey from the hit television show '30 Rock' and we've grown to love Paul Rudd no matter what role he plays; 'The 40 Year Old Virgin', 'Knocked Up' or 'I Love You, Man'. Pairing these two successful actors together - well, pretty much serves up a slice of jocose genius - or does it?

2013's 'Admission' written by Karen Croner and Jean Hanff Korelitz and directed by Paul Weitz had two of Hollywood's hottest to bring this comedy-drama-romance to life. Unique and fun-loving story that brought humor but also plenty of the 'Awww-factor' as things went from bad to worse and then refreshingly okay as the story unfolds with more than perfect comic timing.

With an estimated budget of $13 million USD, filmmakers were able to gross $18 million USD at the box-office. Like-able cast and talented actors but I'm not sure Rudd and Fey had the most believable chemistry; they made it work but perhaps it became a bit fantasy/disney towards the end, when life-changing situations seem alright and easily forgiven.
Posted by Journey with Jair at 12:36 AM No comments: