Posted by Journey with Jair at 12:08 AM No comments: 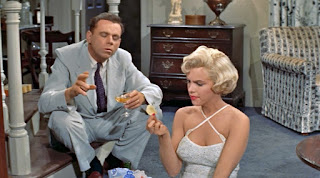 So that’s where that infamous scene of Marilyn Monroe’s dress flying upwards came from! ‘The Seven Year Itch’ that was released in 1955 and written and directed by Polish filmmaker Billy Wilder and starring cult bombshell Marilyn Monroe, Tom Ewell and Evelyn Keyes only won 1 Golden Globe that year and garnered another 3 nominations, however it has gone down in the books for life as an iconic film.

The famous scene that made this Comedy-Romance significantly famous was actually only a few seconds long, but alas it was the heavy magnitude that Marilyn was able to subdue her audience. I must say that I quite enjoyed it and it was a playful comedy shedding light on the temptations all married couples may face at some point or the other. Monroe played her usual role as the clueless and attractive blonde but was delightful and refreshing to watch on screen as she possessed a certain sweet charisma.

An alluring and engaging tale that won’t soon be forgotten.

Posted by Journey with Jair at 9:57 PM No comments: 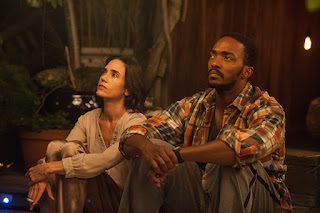 2014’s ‘Shelter’ written and directed by English actor, Paul Bettany (A Beautiful Mind, Da Vinci Code) and whom we can’t forget for his performance in the film ‘Legion’; wonderfully sprinkles the kernels of these main character’s lives’ into the recipe of self-discovery and healing. This film is a daring journey of exploring what it means to face qualms in order to truly live again.

Not to be confused with 'Gimme Shelter' (2013’s drama starring Vanessa Hudgens) whose main character was precisely looking for shelter; Bettany’s use of the word ‘Shelter’ was an adept allegory that posed as a poetic dubiety for acknowledgement and affection. He began writing the script with the intent of people being judged and romance which eventually led to vagabondage. A magnificent treasure, despite it’s non-popularity, it was a pleasure I hadn’t intended on finding.

Acting by ‘Anthony Mackie’ (Hurt Locker, Captain America, Million Dollar Baby) who is slowly becoming a household name, gave a remarkable performance and even acquired a believable Nigerian accent for his role.  Oscar winner Jennifer Connelly (Requiem for a Dream, Blood Diamond, A Beautiful Mind) who we will forever remember from her role in ‘Labyrinth’ also displayed outstanding acting chops, and she even lost significant weight for her role as a heroine addict. They both showed intense understanding and undertaking for what their characters strifes were.

Viewers easily related to the hardships they endured because of Connelly and Mackie’s work. Reaching emotional spikes was effortless due to the heap of cruel and unfortunate turns that unfolded throughout the story. It taught the audience that most times the only way we can rise up and out of situations that spiral out of control is through concord, assurance and the beauty still on hand in life itself. Sometimes our quests in life transform into extremely difficult  and unbelievable situations but this feature not only offers us hope, but also scoops us into trusting in a life of resilience even after visiting the depths of hell and painful loss.

For Bettany’s first undertaking as a film director, I’d say he’s done a mighty fine job. After having worked with a marvelous line of directors, including Ron Howard, Darren Aronofsky, and Joss Whedon, he was fortunate enough to have some tutelage. I won’t be surprised to see more paramount projects coming from him in the future. With a run-time of 105 minutes, memorable music and first-rate acting, it’s definitely worth the watch!

Posted by Journey with Jair at 11:06 PM No comments: 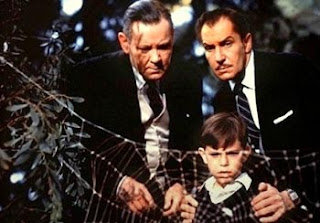 I quite enjoyed ‘1958’s’ ‘The Fly’ written by James Clavell and George Langelaan and directed by Kurt Neumann. This Dramatic/Horror/Sci-Fi had plenty of French flair as it was set in Montreal and starred lovable actor Vincent Price, David Hedison and Canadian actress Patricia Owens.

Quite different in acting styles, shots and overall deliverance of story to modern-day viewers but all the more charming to me! I loved how the film unfolded to reveal the mystery bit by bit. Clever, yet simple story-line which began with a climax, edged on slowly with magnetized mystery and leaving the audience terrified towards the end. Quite powerful indeed!

The film raises thought-provoking questions about man and his inventions and his intentions once unlocking such capabilities. It also shows how trust can be bent even with the best intentions. I’d watch it again - twas’ a wonderful ‘Friday the 13th’ treat!

Posted by Journey with Jair at 10:27 PM No comments: 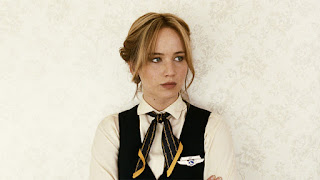 “When you’re hiding you’re safe, because people can’t see you. But funny thing about hiding: you’re even hidden from yourself.”

In case you were wondering, 2015’s ‘Joy’ starring Academy Award Winning Actress Jennifer Lawrence is a biographical film. It is in fact based on the life of ‘Joy Mangano’, an American inventor who became known for many inventions including the self-wringing ’Miracle Mop’ and is the president of ‘Ingenious Designs LLC and she appears frequently on the US television channel HSN (Home Shopping Network).

Written and directed by David O. Russell, it was nominated for 1 Oscar that year and received 18 other nominations and 4 wins. Two-time Oscar winner Robert De Niro as well as Four-time Oscar nominee Bradley Cooper also co-starred in this film. Listed under genres of Comedy and Drama, I found very little to laugh about in this film. Perhaps there were dark humorous moments, but I found it mostly dramatic and really very sad. The story showed moment after moment of adversity, failure, and falls and even though there was some retribution, the tone of the film was mostly morose.

With an estimated budget of $60 million USD it was beautifully shot and executed, however they barely scraped even at the box-office, grossing only $56 million USD back. Certainly worth the watch, as many ‘under-dogs’ will be able to relate to it; hopefully inspiring our audience to keep dusting themselves off and keep pushing forward towards their goals in life.

Posted by Journey with Jair at 9:54 PM No comments: 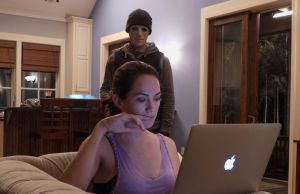 Written by Kate Siegel and Mike Flanagan and Directed by Mike Flanagan and starring Kate Siegel, this 2016 Horror/Thriller is the perfect example of what a good marriage and good teamwork is all about! With a run-time of 81 minutes, and shot entirely in one space, this film although with a small budget was certainly gripping from beginning to end. In fact, this film was sensationally scary which I did not expect. In my opinion very unique and special and because of that it kept the audience on the edge of their seats.

Some people may think, this type of horror film has been done time and time again, but what made it so unique is that our main character ‘Maddie’ played by Kate Siegel does not speak for the entire film. Why? Because she is deaf. Actors in this film not only ‘signed’ but also showcased their acting chops as the majority of the film was without dialogue. A clear example of the ‘showing’ technique, not ‘telling’ which is always recommended but certainly more difficult to do.

Terrifying throughout and well-made, it was suspenseful yet, as a viewer I would have liked to know more about the motive for the antagonist and have him revealed much later with a solid connection to our protagonist.

Posted by Journey with Jair at 10:00 PM No comments: 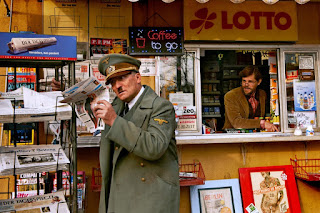 I absolutely enjoyed 2015’s ’Er its wider da’ or ‘Look Who’s Back’. This German film written and Directed by David Wnendt and starring Oliver Masucci, who captured a rather confused and powerful Adolf Hitler, Katja Riemann, Fabian Busch, and Lars Rudolph among others. Filmmaker Wnendt got the idea to do this film because he wanted to see how people would react to Hitler.

Based on the bestselling novel by Timur Vermes and grossing triple of its original budget its fair to say that the film was a success. Posing many interesting questions to viewers should their be a resurgence of this kind and highlighting the budding problems in Europe at the moment, it was a clear display of how humans work. Hitler is nothing like modern people think, but what he was able to persuade society to do in the past was still alive in some people of today.

Extraordinary acting and wonderful candid interactions that were a mixture laugh-out-loud funny and the sad perspective of what we still deal with in the 21st century. 4 nominations that year and no wins, but definitely a winner in my book; this story I believe was a mirror separating the past and the present, lets hope, not the future.

Posted by Journey with Jair at 9:32 PM No comments: