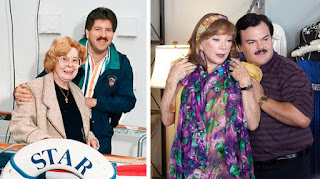 ‘Bernie’ based on the true story of ‘Bernie Tiede,’ was an excellent portrayal of the warm, charming and generous undertaker who got on the wrong path. Although this Crime/Drama ended a bit tragic there was great humor involved and it is probably one of actor Jack Black’s best performances. Shirley MacLane stars alongside him as the ice-queen widow ‘Marjorie Nugent’.

Written and directed by Richard Linklater, whom worked with Black for ‘School of Rock’ didn’t make as much at the box-office but his film was nominated for a Golden Globe in 2011, and received 16 other nominations and 9 wins that year. Even though it was filmed in Bastrop, Texas, real residents from Carthage, Texas who knew both Bernie and Majorie provided commentary on actual events for the film. Mathew McConaughey who plays attorney ‘Danny Buck’, along with Richard Robichaux who portrayed stockbroker ‘Lloyd Hornbuckle’ added another layer of depth to this quirky tale. Jack Black also spent time with the real ‘Bernie’ to study his mannerisms for the movie and did his own musical renditions throughout the film.

The details throughout were well seamed with reality and the beautiful landscapes of this small-town painted the ideal picture Linklater needed his audience to see. Engaging and delightful, this film isn’t your typical Docu-drama and despite some very grim events, it’s plenty of ‘laugh-out-loud’ fun!

Posted by Journey with Jair at 8:37 PM No comments: