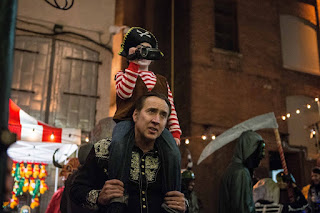 Based on a novel by English Tim Lebbon, this 2015 Horror/Thriller was adapted into screenplay by Dan Kay and was directed by German Uli Edel (Houdini). Not entirely a fan of Nicholas Cage, however this film was a decent one and both Cage and Sarah Wayne Callies, who plays his wife, gave both worthy performances. Besides some small implausible moments, the story’s foundation was strong enough and believable throughout.

Set in New York City on the night of Halloween, the music, costumes and highlights were wonderfully eerie and the movie brought the fear factor at all the right junctures. It was a lot better than I expected and I was quite happy with the way it progressed. I feel that viewers would be able to relate and because the information presented was so intriguing and structured, it was easy for the audience to share in the tragedy, panic and energy behind the adventure.

An honest film with good story, and just enough fright to keep you on the edge of your seats.

Posted by Journey with Jair at 11:32 PM No comments: 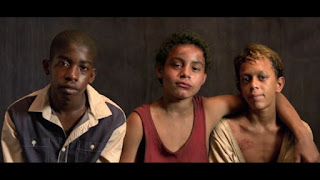 This 2014 Adventure/Crime/Drama was set in the favelas of Brazil and was nominated for 1 BAFTA Film award  and 4 other nominations and had 2 wins that year. Based on a novel by Andy Mulligan and adapted into screenplay by Richard Curtis and Felipe Braga, this touching tale was directed by Stephen Daldry and Christian Duurvoort and was anything similar to it’s title. ‘Trash’ is a treasure that was exciting, riveting, heart-wrenching and eye-opening.

Poverty and injustice pull heavy at our heartstrings but the film’s message is one that is thrilling and intense but shows that even if one is surrounded by adversity and opportunity can arrive to change your life handsomely forever. With a run-time of 114 minutes ‘Trash’ is the music, the soul, the energy and a pearl of a story, you won’t want to miss!

Posted by Journey with Jair at 10:49 PM No comments:

**The truth will set you free... Do your part & let the Universe dish out revenge...
Posted by Journey with Jair at 8:08 PM No comments: