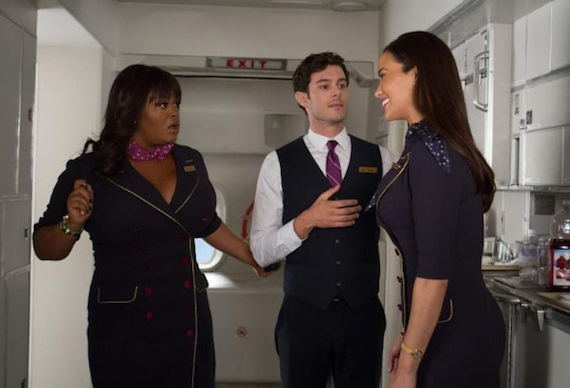 Saw a passenger watching this on one of my transcontinental flights and thought; “I need to see this too!” Written and Directed by David E. Talbert and based on his novel, this 2013 comedy follows the dating life of a particular flight attendant who is looking to get married. Paula Patton, Derek Luke, Taye Diggs, Austrian heart-throb Boris Kodjoe, West-African ‘model-turned-actor’ Djimon Hounsou, Jill Scott, Christina Milian, Tia Mowry, La La Anthony, powerful Jenifer Lewis, as well as scores of others came together to tell this story.

Sure the flight attendant moments were relatable but the story itself was a bit weak in my opinion. With similarities to ‘The Terminal’ or scores of other ‘I Want to Get Married’ films, I felt that the issues and wants are valid however the way it played out was not smooth, or solid enough to make viewers connect on a deeper level with our main characters. No surprise elements here and despite it all with an estimated budget of $8 million USD film-makers were able to garner $21 million USD back at the box-office in only a short 3 months later.

Nothing abysmal or larger-than-life message, but makes for a fluffy and entertaining night.
Posted by Journey with Jair at 10:12 PM No comments: 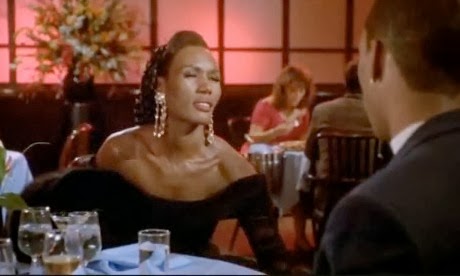 Yes, it’s true. I only recently saw this film for the first time. Hard to believe seeing how much I enjoy Eddie Murphy films. In my defense in 1992 I wasn’t allowed to see Rated R films. With an estimated budget of $40 million USD, this comedy/drama/romance raked in a cool $70 million at the box-office.  It received one win and 4 other nominations.

Written by Eddie Murphy and developed into screenplay by Barry W. Blaustein and David Sheffield and directed by Reginald Hudlin. This was the standard case of the importance of ‘doing unto others, as you would have them do unto you’; or in other words, ‘the player’ who get’s ‘played’. Eddie Murphy stars and does a fine job as usual, and black beauties Robin Givens, Halle Berry and the provocative, unique and talented Jamaican Grace Jones join in on the fun.

Tables turn quite easily and so it’s important to do the right thing and be careful how you treat others; the audience learned the unrest, pain and trauma that can be caused when one does the opposite and they instantly became empathetic for our main character when he’d learnt his lesson.

It was a joy to recognize beautiful and talented legend Eartha Kitt on screen with her distinct voice and elegance as I’d first had the pleasure while watching the 1958 film called ‘Anna Lucasta’. Chris Rock, Tisha Campbell-Martin, Martin Lawrence and David Alan Grier also performed exceptionally and comedically bringing the giggles consistently.

Posted by Journey with Jair at 9:45 PM No comments: 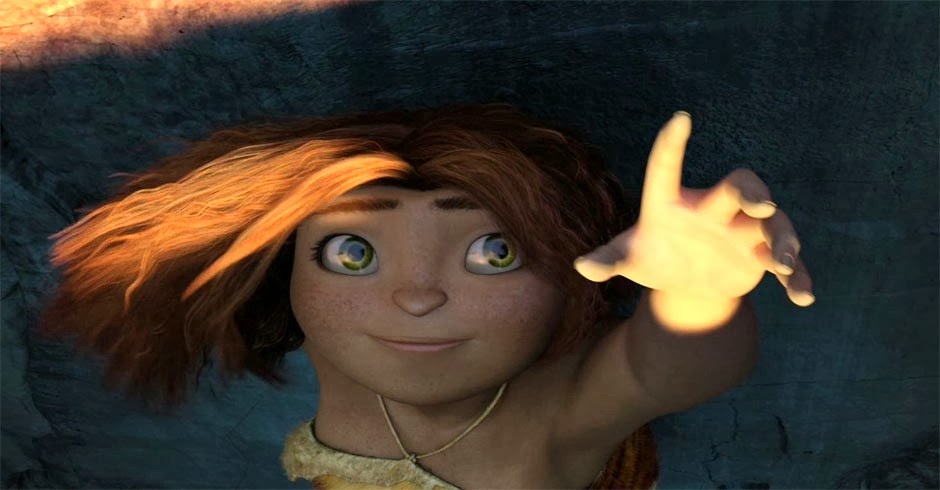 This animated 2013 adventure-comedy wasn’t at all what I expected; but ‘Dreamworks’ again slashes any negative reviews and leave audiences wanting more - every - time. With a budget of $135 million USD writers Chris Sanders and writer/director Kirk De Micco developed a compelling enough story to make a profit of $187 million USD at the box office that year.

Although none of the animals depicted were biologically real animals, the dialogue, narration and heart of the tale is what gave the sense of brilliance. Viewers are able to relate despite the time-period as the humans no matter the time through history have all dealt with the same challenges. You can’t choose your family but you can choose your friends. Your family is always there for you, no matter what. The younger members always want to explore and do their own thing; find their independent and the elders always are cautious and concerned. Classic and yet told in a wonderfully colourful way!

Nicolas Cage, Emma Stone, Ryan Reynolds, Catherine Keener, and other well-known American actors performed voices for their characters. It was funny but quite heart-warming and sentimental as well. This is one the entire family can enjoy!
Posted by Journey with Jair at 9:20 PM No comments:

**You're beautiful...EvErYdAy~ Enjoy the lovely Bruno Mars~**
Posted by Journey with Jair at 7:36 AM No comments: 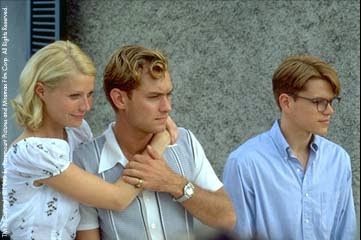 “If I could just go back…if I could rub everything out… starting with myself.”

One of the many exquisite lines found in this wonderful dramatic 1999 film based on the novel by American Patricia Highsmith and adapted into screenplay and directed by English Anthony Minghella. Nominated for 5 Oscars that year and garnering 11 wins and 53 other nominations its easy to say this story moved quite a number of audiences.

Nail-bitingly good and thrilling at all the right moments this $40 million USD budget soared above and beyond everyone’s expectations and made back a cool $81 million USD a couple months later at the box-office. ‘The Talented Mr. Ripley’ was a heart-breaking masterpiece from the story, acting, cinematography and message of being true to yourself; it is a film that will be remembered till the end of time.

Posted by Journey with Jair at 4:47 PM No comments:

Country of my birth and unique all on it’s own, Trinidad & Tobago became independent in 1962. Trinidad coming from the word ‘Trinity’ (3 ships that rediscovered  the islands with Christopher Colombus) and Tobago from ‘Tobacco’ as Tobacco and Cotton were once a form of agriculture there. Two islands, one nation, that were ruled by the French, the Spanish, the Dutch, the Courlanders and the British (last and longest). Between the countries that ruled them and the people that settled there it’s history is rich and its beauty un-mistakable.

Our first settlers/natives were the tribes of the Caribs and Arawaks, and after the Europeans settled, they brought slaves from Africa, and then the East-Indian Indentured Labourers. Because of the countries’ rich resources like the sugar-cane plantations, cocoa, tobacco, cotton and discovery of oil, Trinidad & Tobago attracted many others like the Chinese, Portuguese and Syrians. To this day, Trinidad & Tobago is known as one of the more affluent Caribbean islands and is known for its rain-forest landscape, and musical and exotic people who have won Nobel Peace Prizes, Miss Universe competitions and gold medals in the Olympics. A variety of religions, languages and diverse culture still lives on today.

Trinidad and Tobago is located in the Caribbean Sea at the bottom of the archipelago of islands right northeast off the coast of Venezuela (South America). It is heavily forested with hundreds of species of tropical birds and beautiful white and black sand beaches in it’s smaller twin-island Tobago.

In the 20th century Trinidad & Tobago was the only country to produce an acoustic instrument known as the ‘Steel-pan’ (Steel-drum) which was made out of old oil drums. It is commonly used all over the Caribbean and it is recognized not only in steel orchestras but world wide and even taught in schools.

But perhaps what Trinidad & Tobago is known best for is for it’s CARNIVAL. Which has been dubbed  as ‘The Greatest Show on Earth’. It is an annual event held on Monday and Tuesday before Ash Wednesday and is well-known for it’s colorful costumes and exuberant celebrations!

We are 98% literate and take our sports of cricket and football (futbol) very seriously. The Red, Black and White of the national flag is to symbolize the warmth of the people, the earth and water respectively. The motto: ‘Together we aspire, together we achieve’ reminds us that we can’t succeed on our own but like our varied history we stand stronger together as one! :))
Posted by Journey with Jair at 4:07 PM No comments:

Email ThisBlogThis!Share to TwitterShare to FacebookShare to Pinterest
Labels: trinidad and tobago

Don't Fish in my Sea 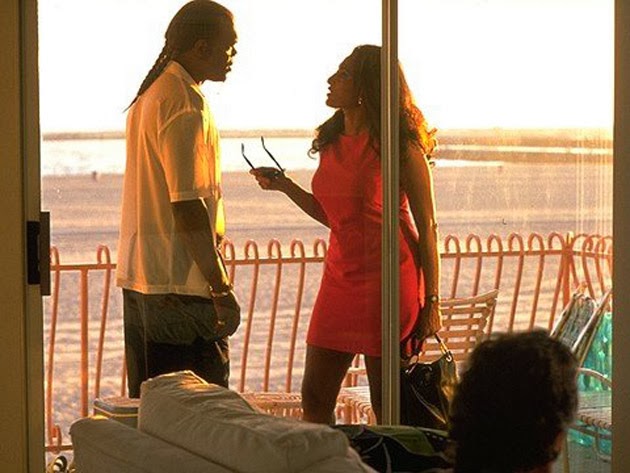 Nominated for 1 Oscar that year with another 7 wins and 12 nominations was Quentin Tarantino’s Crime-Drama-Thriller ‘Jackie Brown’ starring the foxy Pam Grier. With a run-time of 158 minutes and an estimated budget of $12 million USD this 1997 film not only elevated audience’s heart-rates, but made them hang on every scene as if their own lives depended on it and it quadrupled in profits that year.

Excellent story, execution and exciting dialogue; this film was a magnificent ride into the minds of those who lived ‘fast’ lives and had the ‘street-smarts’ to pull off extraordinary feats. Rated R for strong language, violence, drug use and sexuality, this film is not recommended for children; but adults are sure to not only be entertained but also ask yourself the question how much would you risk to gain the happiness or life you deserve?

Robert De Niro, Samuel L. Jackson, Bridget Fonda, Robert Forster and Chris Tucker all join in on the fun. There isn't one short beat in this film, it's high energy and fast paced from beginning till end. If you like flight-attendants, action and a few laughs, this one makes for a great night of fun!

Posted by Journey with Jair at 2:03 PM No comments: 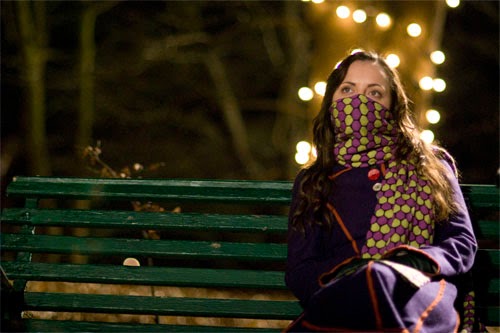 I’d heard about this film from a dear friend, and glad to finally have the opportunity to enjoy. Written by Leslie Caveny (who wrote the American television series ‘Everybody Loves Raymond’) and directed by Mark Palansky. A heart-warming Comedy-Fantasy-Romance released in 2006 which cost an approximate $15 million USD and starring daring Christina Ricci (in one of her ‘tamer’ films), Blue-eyed Scottish James McAvoy, American blonde sweet-heart Reese Witherspoon, and a very lovely deranged Catherine O’Hara.

This was a fairy-tale with several lessons to be learnt; from the way we view the world and the way the world views us. To what parenting really means, and also to be true to and of accepting yourself. The dialogue and quotes within this film were really marvelous as our audience got a healthy scoop of reality despite it’s ‘Once Upon A Time’ beginning. It’s not just about finding ‘true love’s first kiss’ but an adventure in finding love for one’s self. Wonderful cinematography with a cheerful story and special message.

This is one the entire family can enjoy! :)
Posted by Journey with Jair at 1:56 PM No comments: