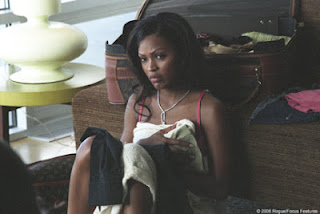 This 2006, Action-crime-drama was a predictable yet well executed movie and due to snazzy camera angles, gang-violence and famous and believable acting, film-makers were able to make double at the box-office.

Written and Directed by Vondie Curtis-Hall and set in the ‘hood’ of South Los Angeles, viewers were able to easily identify with human wants, tragedies and dreams because of careful planning and sincere acting that was portrayed throughout this film. Model turned actor Tyrese Gibson wowed with his never-ending determination as ‘O2’ with the promise he made to his son, and co-star Meagan Good who not only oozed sex-appeal but also a really wonderful range of emotions made this story a believable and exciting one.

Other famous names that may tickle your fancy are: The Game, Kimora Lee-Simmons, and Lawrence Tate who plays Lucky. The audience is taken on a trip from the slums to the city and then to El Lindo, a place where the past is forgotten and new dreams take flight.

Hijacked cars, kidnapping, dangerous drug-lords and survival on the streets are all extra elements that made the simple story of family first and promises that are never meant to be broken shine true. J
Posted by Journey with Jair at 4:09 PM No comments: 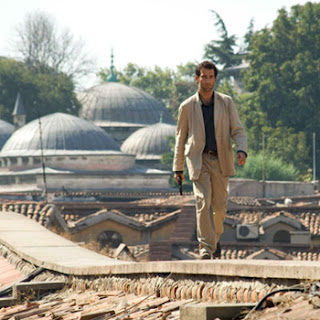 I wouldn’t be lying when I say it was firstly English dapper Clive Owen that pulled me into watching this 2009 film. J And then secondly by everybody else! ‘The International’ had scores of professional and sought-after actors which include Aussie Naomi Watts, Danish Ulrich Thomsen, Russian Armin Mueller-Stahl, and Turkish Haluk Bilginer among many others. Written by Eric Singer, directed by German Tom Tykwer and with a budget of an estimated $50 million USD it proved to be quite a riveting experience.

Although quite an interesting story-line about banks covering up illegal activities and cocooned with action-packed crime and mystery. I found it difficult to really identify or feel for the main characters as perhaps the back-story or relationships weren't thoroughly developed. Although Clive Owen who plays Louis Salinger doesn’t rest until justice is served, and his trusty side-kick Watts (Eleanor Whitman) is forever at his side; the way the story progressed continuously uncovering information made it more difficult for the audience to identify with their arms-trading terror.

I absolutely loved the cinematography throughout this film; from Istanbul Turkey, to New York to Berlin; this film took its viewers on a trip around the globe. The camera framed each lovely destination tastefully and I felt captured crisp essences of each country.

High rollers, high-stakes, high-crime, a very reminiscent Bond-type film without the Bond-girl (no offense Naomi), this movie takes us on a journey of financial destabilization from the people you’d THINK you can trust the most.

Posted by Journey with Jair at 3:42 PM No comments:

Email ThisBlogThis!Share to TwitterShare to FacebookShare to Pinterest
Labels: clive owens, the international 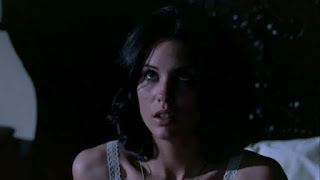 From 1997 to 1977, I take you back, way back to a lovely little feature called ‘The Sentinel’ starring, Pilipino beauty Christina Raines, the versatile Chris Sarandon, English gem Ava Gardner and a young and spiffy Christopher Walken. This mystery, drama and ‘anything but horror’ was written by Jeffrey Konvitz whom you may remember from ‘Spy Hard’ and directed by English Michael Winner.

“She was young, she was beautiful, she was next!” is a splendid tag-line for this film because who isn’t fascinated with a young fashion model’s life? Women want to be like her, and men fancy that she doesn’t want to commit, but what exactly is she in next for?

Despite ‘The Sentinel’ not having modern ‘hot-shots’ or conveniences, viewers can see the care, time and work that went in to make this film a decent one. From wardrobe to set-design and great acting, this film flowed nicely and in perfect order. J
Posted by Journey with Jair at 2:12 PM No comments:

Email ThisBlogThis!Share to TwitterShare to FacebookShare to Pinterest
Labels: 1977, the sentinel 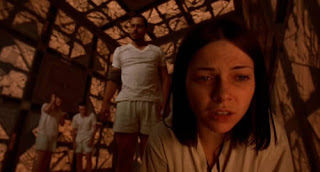 Directed by Vincenzo Natali  and written by Andre Bijelic and Vincenzo Natali this 1997 Canadian horror/mystery/sci-fi had a bizarre and thought-provoking story. They also managed to keep its audience’s attention on a ride of fear, paranoia and desperation despite a tight budget of only $365,000 Canadian dollars. It boggles my mind though at how smoothly they were able to take us on this journey all contained in one small box?

One would think the acting by Nicole de Boer, Maurice Dean-Wint, David Hewlett, Nicky Guadagni and Andrew Miller would be phenomenal; but sadly they all were quite the opposite and horrendously over-the-top. It truly sickened me with their acting abilities and direction or lack-there-of to see how they portrayed each character with specific and colourful personalities.

I do give kudos though for any film-maker ‘making-things-work’ and ‘pulling-the-show-together’ with the enormous amount of constraints and elements already against them! It goes to show that hard-work does not go un-noticed as ‘Cube’ received 13 wins and 6 nominations.

7 complete strangers working through a maze of deadly traps would tickle anyone’s fancy; a couple years later the 'Saw' series of movies was born; but I’m a firm believer in, if you're going to do something, then you might as well do it good. It makes no sense to me, in having a great story and executing it shoddily and worse having nauseating acting abilities.
Posted by Journey with Jair at 1:29 PM No comments:

Email ThisBlogThis!Share to TwitterShare to FacebookShare to Pinterest
Labels: cube 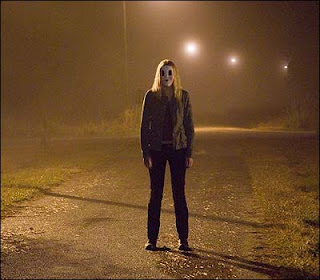 True stories are always more compelling and this is perhaps why ‘The Strangers’ had that more of an edge than other typical ‘slasher-type-horror films’. Winner of 2 awards and 8 nominations, this 2008 American horror/thriller was written and directed by Texan Bryan Bertino and it was well thought-out and executed as was the torment the young couple that endured it also. Beauty Liv Tyler and English actor Scott Speedman (whom you may remember from the Underworld movies) came together in this film to create a painstakingly yet addicting frightful production.

With an estimated budget of $10 million they were able to gross $52 million within the US alone and thanks to the jolting FBI statistics of violent crimes in America each year as well as the 911 call at the beginning, it set the mood throughout the film without specifically revealing what the audience could or should expect.

The film moves much slower than expected and it sets the viewers up to enquiries of why and how things like this could even occur. Despite it being about murder and senseless killings, this film turned out to be much more of a clean-cut psychological thriller. Between the remarkable agony expressed by our main actors and the jolting and eerie soundtrack, it’s enough to get your heart palpating and your thoughts horrendously altered by fear.

What is most un-settling is that throughout the entire film there is not one 'peep'; complaint, expression or motive from those that commit the crime.

Posted by Journey with Jair at 9:13 AM No comments:

** The lovely ‘Singing Sandra’ from Trinidad & Tobago. Calypsonian with a message to the people – you may remember ‘Die with My Dignity’:

Posted by Journey with Jair at 3:59 PM No comments:

Email ThisBlogThis!Share to TwitterShare to FacebookShare to Pinterest
Labels: bring back the old time days, nappy mayers, trinidad and tobago 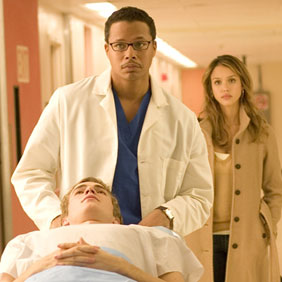 It’s the lesson, the mystery, and perhaps the thrill of this 2007 movie that keeps its audience in their seats. ‘Awake’ written and directed by Joby Harold was a successful attempt at delivering agony, love, betrayal, and fear all at once. Casting ‘hottie’ Jessica Alba and ‘eye-candy’ Hayden Christensen wasn’t such a bad idea either.

‘Anesthetic Awareness’ is a real condition that 1 in 700 patients during surgery experience;  this film’s explanation and the preface of what the film  was based on; made for a very solid back-story and level of believability to set the tone throughout the film. I enjoyed how Harold depicted the transition between life and death by the use of lights. I also enjoyed the range of heightened emotion and deception portrayed by esteemed actor, Terrence Howard, who played ‘Dr. Jack Harper’. Lena Olin who you may remember from ‘Chocolat’, plays the role of the strong mother ‘Lilith Beresford’ and  she shines and engages the audience like a ‘bull in a china-shop’.

For anyone who has been in a surgery or under anesthesia, this film would gain some appeal. Being paralyzed by fear is one thing; being unable to fight for your life is another. J
Posted by Journey with Jair at 3:01 PM No comments: 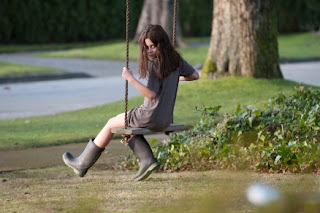 I was not aware of the marvelous treat I was in store for as I nonchalantly decided to visit the cinema at 1 in the afternoon. I sat alone and in the dark gripping into the arms of the chair and my pashmina and mumbling, “Ohhh!” every so often! J

It’s always nice to see a current film; and more so, one that’s actually good and scary! I don’t scare easily and it takes quite a bit to make my blood curdle, but this 2012 horror/thriller, ‘The Possession’ not only had me uneasy in my chair but also had my pores and hair on my neck standing with nervous delight! J

Written by Juliet Snowden and Stiles White, this film was executed judiciously from beginning till end. Ole Bornedal, Danish film-maker who started his own theatre, ‘ The Aveny’ after trying and failing to enter the Danish Film school is now one of the most influential creators of ‘The New Danish Cinema’. You may remember him from ‘Night Watch’ or ‘Just Another Love Story’; but I think he struck gold in truly capturing the essence and authenticity of this frightful true story which happened to a family over the course of 29 days.

Jeffery Dean Morgan plays the father figure Clyde wonderfully, and reminds us very much of a statuesque Javier Bardem. Kyra Sedgwick who you may recall from ‘The Closer’ plays Stephanie. And Natasha Calis whose known as the next ‘big-little-thing’ starred as ‘Em’ and has been working her acting muscle since the tender age of 7 years old. She is known for doing great strong emotional scenes.

It goes to show that some things from the past can come back to bite you if you don’t dispose of it properly! J You might need more than an arm-chair to grip into, when watching this movie.

Posted by Journey with Jair at 2:36 PM 4 comments: