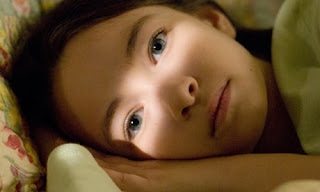 Written by Ray Wright and directed by German director Christian Alvart, this film was one of the scariest films I’ve seen in a long time. I thought it might be slightly thrilling but it took me most times completely off-guard. I found myself sensationally tensed and surprising myself by even covering my eyes during some ‘too-much-to-handle’ moments.

Cute, pouty-mouthed Renee Zellweger gave a wonderful performance at keeping her cool during the most insanely unbelievable moments as social worker Emily Jenkins and bright-eyed Jodelle Ferland who plays mysterious Lilith Sullivan did a pretty darn good job at showing her acting versatility at such a tender age. Ian McShane and Bradley Cooper also graced the screen, both bringing masculine flair and great commitments to their characters respectively.

I loved how believable and gritty the film felt; because even though there were stars, there wasn’t make-up or dazzling outfits and snazzy cars. The low-key, quiet and normal atmosphere makes films like these even more convincing and it’s a method used in many Stephen King films; which in my opinion is some of the best! J

Posted by Journey with Jair at 5:02 PM