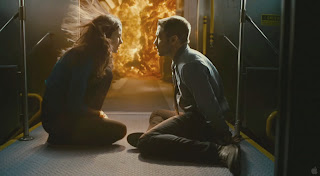 “What would you do if you knew you had less than 8 minutes left to live?”

“I’d make the last seconds of my life count.”

“What has gotten into you?”

“Just tell me everything is going to be okay…”

“Everything is going to be okay.”

2011, I must say has had some pretty cerebrally-electrifying movies; one of them being ‘Source Code’ which I enjoyed immensely. Like ‘Limitless’ and ‘The Adjustment Bureau’, it shows writers going beyond the average reality-television mindless-stupor and really creating and pushing their mind and others in a much more stimulating direction.

Ben Ripley not only wrote an exciting action film but also one filled with not just romance but a whole lot of heart. It wasn’t just about saving the world, but also about savoring the time and those around you.

British Duncan Jones directed to perfection our American stars Jake Gyllenhaal and Michelle Monaghan. Piercing blue-eyed, Vera Farmiga whom you may remember from ‘Up in the Air’ also gave an outstanding performance and re-introducing Jeffrey Wright whose film credits date back as far to 1990, scores of them you may have seen but not recall him in like: ‘Black Out’, ‘Quantum of Solace’, ‘The Ides of March’ and ‘Extremely Loud and Incredibly Close’ to name a few who also was committed to his austere character.

The bomb, explosions, the girl, the guy, saving the day with the extra ingredient of brain; how is it possible, how can this happen, how will it end; are all ingredients to this delectable recipe for cinematic success!

What would you do if you only had 8 minutes left to make things right again? What is of importance in your life? Make every second count…it’s shorter than you think! J

Posted by Journey with Jair at 9:15 PM