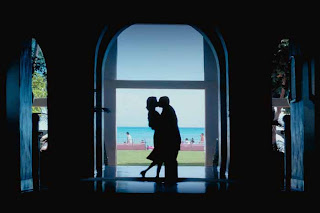 And the girl says “Yes!” after the guy comes clean. It’s possible to be truthful and happy; indeed! And with love in your life you ARE stronger than ever! Written and Directed by Paul Thomas Anderson, this 2002 film was certainly one of the more stranger films I’ve seen. Never been fond of Adam Sandler but he’s got the ‘It’ factor as far as attracting crowds on the opening weekend for films. He was committed to his eccentric character though and brought comedy more believably as opposed to changing his voice to sound like a 5 year old. Emily Watson whom you may remember from ‘Red Dragon’ with her piercing eyes and lilting English accent was perfectly cast I thought for this peculiar film about love and what it takes to stand up to your fears.

A romantic journey, some might say; but I rather say it was a journey towards recognizing the power within us all. Sure we are aware of it and privy to the strength we hold within our veins, but not until we are able to share ourselves with kindness and love are we fully aware of the infinite greatness we each possess. That love is the ultimate power and emotion and once we harness it and use it, we can never fail. J

The film from beginning till end seemed un-orthodox with a very bizarre and convoluted plot, but to some this can come across as an artsy and mind-blowing cinematic delight. Transitions with lines of colour, Hawaiian ukuleles and argumentative dialogues, this film is one that will un-evenly jolt your senses back to the screen whether you want to or not. Paul Thomas Anderson is known for his unusual yet successful movie-magic, creating triumph with films like ‘Magnolia’ and ‘There Will Be Blood’. Not one of my favourites but certainly one to go down in the books for anyone studying film.

Posted by Journey with Jair at 2:50 PM