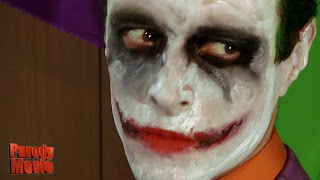 This feature-length independent comedy released by ‘The Last Great Movie Company’ in 2011 should be an example for all aspiring writers, directors, actors or people who want to work in the film business, and have always been too afraid to take that beginning step. Written and Directed by Charles Dewandeler, a native of Detroit, Michigan, he shows fearlessly what taking life by the reins and riding it means. He didn’t have a big budget, or Brangelina to act the leading roles but he still managed to make his vision a reality by not taking no for an answer and persevering through production setbacks.

Quirky and full of satire, Dewandeler uses his own experiences in becoming a film-maker as well as paying homage to his favorite comic book characters and superheroes to bring this movie to life. Cleverly changing logos, costumes and even race for some of his characters so that he wouldn’t have any copyright issues he was able to fruitfully create an action-packed and entertaining comedy.

One can see, that despite the tremendous amounts of work that was completed in order to have the production movie-ready, that he had a dedicated team and a plethora of determination. Actors including himself showed talent and team-work; and although they all were ‘new faces’ they understood Dewandeler’s dream. David Legato, Curt Green, Julian Gant, Sean Scarlett, Melissa McDowell, Jennifer Altimore, Erick Steele, Chris Dewandeler and Scott Czasak all brought the characters of Parody Movie to life. Dewandeler himself also played in roles, one being the inimitable skit of ‘Miniana Jones’ and another unforgettable and quite terrifying portrayal of the ‘Jokester’.

Now available on DVD and VOD streaming on Amazon.com, you can purchase, support and be inspired too. For more information or to schedule an interview with the film-maker himself, feel free to visit: www.ParodyMovieDVD.com or email him at: cdewandeler@gmail.com

You can sit there dreaming, or you can stand up, file your dreams under ‘Now’ and start making it happen; the choice is up to you!

Posted by Journey with Jair at 6:22 PM