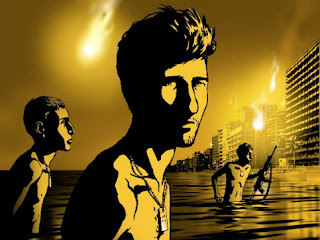 “Memory is dynamic. It’s alive. If some details are missing, memory fills in the holes with things that never happened.”

This 2008 film written and directed by Israeli Ari Folman, first released in Israel, portraying true events of the 1982 invasion into Lebanon touched me in far more incredible ways than I could ever expect. It is a cinematic masterpiece; and a testament of what passionate film-making is all about. I was mesmerized from beginning till end and could not peel my eyes away from the screen; war movies aren’t my thing, but the way Folman constructed this one with such beauty and heart, even something so morbid could be seen in the most fascinating and tender way.

The conflicts that continue to happen between our fellow man is truly saddening because it seems that we may never learn; and that history will continue to repeat itself. The live-action footage, redrawn as digital paintings and then adapted with flash animation was terribly extraordinary and the pace of the film helped the audience completely connect with each story and the enormous depth with which each scene held. There were many disturbing moments as any war film would have but the fact that it was animated ,spoken in lilting Hebrew, and had exceptional , elegant classical Bach music playing throughout, made it possible for our viewers to handle.

There was no comedy in this film. It was heavy drama, allure and tremendous grief. I would say puts you in a dream-like trance, because war is seen in the most uncharacteristic way. Because it is true and conveyed in recollective stories, one is unable to compartmentalize it into some type of fantasy film despite its splendor, and instead sees it for what it is, a modern day documentary that is impossible not to draw you in because of its incredible carnage.

Every scene is executed with such devoted detail and Folman takes us over the edge in distress when we view the surprise switch of unpleasant stimulation at the end.

Vibrant, heart-wrenching and sensational in every way; certainly a film I’d recommend for a dose of truth and discovery of how important it is to balance the two sides of human nature. We don’t know what to do? “Pray and shoot!” is not the answer. Love is the answer… it is always and will be forever.

Posted by Journey with Jair at 1:55 AM

Email ThisBlogThis!Share to TwitterShare to FacebookShare to Pinterest
Labels: It's all about Love, Love