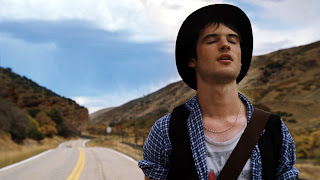 I remember seeing the lovely poster for this film at a bus-stop place I’d drive by every so often; and every time I passed it I’d say, “I need to see this movie!” I couldn’t make out the name, but the image was bright in my mind. I wanted to see what it was about. I mean, how often does a man take his hat off for a lady? Turns out that the title was ‘Waiting for Forever’ and it’s funny because that’s how long a girl has to wait for somebody special to love.

This 2010 film was an enchanting one; quite unusual and marvelous all in one; a love story yes; but typical, most certainly not. Our main characters were Emma played by American beauty, Rachel Bilson and Will played by British bombshell Tom Sturridge; both were believable in their characters, but Tom’s portrayal of a smitten boy in wincing pain being so close but far away from the one he loved; was absolutely phenomenal! The film was different than other love stories because it made us believe that our main character Tom was ill because of his fear to make his love known for such a long time; but also because of Emma’s reaction to him after he finally mustered up the courage to say it.

The audience connected right away with this character because his depiction was very sincere and the writer Steve Adams and director James Keach both gave its viewers enough back story and eloquent information about what brought him to his present situation. The close-shots of eyes and beautiful landscapes and dream-like sequences gave the film a very romantic feel. The way Sturridge viewed the world was beautiful and un-jaded, it made you feel alive!

It pays for your parents to already be in the film business, as directors and actors as our two main stars have been born into this dream-world of film; but their talent really backs up their assets. They did a brilliant job! Be prepared for a wonderful ride with loads of tears and extra thumping of your heart! J

Posted by Journey with Jair at 9:00 PM

Email ThisBlogThis!Share to TwitterShare to FacebookShare to Pinterest
Labels: Love